A Breath of Fresh Air

The ABCs of O3

Ozone, chemically represented as O3, is a highly reactive gas that can be broadly divided into two categories—“good” and “bad.” Good ozone is found in the stratosphere and shields the Earth from harmful levels of ultraviolet radiation; bad ozone is created near the ground level from various natural and human sources, and can have detrimental effects on human health and the environment.

In 2008, the U.S. Environmental Protection Agency (EPA) set bad ozone limits to 75 ppbv (parts per billion by volume) in its National Ambient Air Quality Standards (NAAQS). Since then, updated epidemiological studies have shown there would be better health benefits from lowering it even further.

While EPA considered a reduction, critics asked if some areas of the U.S. could regularly be out of compliance if the bar were set too low, mainly due to high levels of “background ozone.”

In turn, Pat Dolwick, a scientist at EPA's Office of Air Quality Planning and Standards, emphasized that the focus was on the well-being of the public. “The primary consideration is what NAAQS level is requisite to protect public health with an adequate margin of safety.”

So what is background ozone? It’s the ozone that would normally exist without any human-produced emissions being added to the mix, and it’s considered beyond the constraints of regulations. This includes ozone from natural processes, as well as ozone from foreign locations.

The difficulty comes when updating NAAQS policy. Before setting limits on the man-made emissions, EPA wanted to first determine a limit that could be feasible when considering background ozone across the U.S. as a whole… and that can vary widely.

Due to previous successful collaborations, EPA reached out again for AQAST's knowledge while the agency determined the suitability of a new standard.

In a joint project with EPA and NOAA, an AQAST Tiger Team first needed to find the errors and uncertainties in the current model estimates of background ozone.

“Satellite data can be very valuable in evaluating the pollutant emissions inputs that are the foundation for most ozone modeling analyses. They can also be useful in assisting the evaluation of ozone model simulations.” Pat Dolwick, U.S. EPA

“Our paper was the first to use two independent global models to estimate background,” noted Arlene Fiore, AQAST member and associate professor at Columbia University. Both of those models incorporate Earth observations into their calculations from the Ozone Monitoring Instrument (OMI) and Tropospheric Emission Spectrometer (TES) aboard NASA’s Aura satellite.

“The [data] retrieved from TES and OMI provide a constraint on free tropospheric ozone, which is the pool of ozone that includes background, that is available to mix down into near-surface air,” said Fiore. And despite the seasonal and regional differences across the U.S., the study determined that background ozone alone would not typically push locations over the new standard. “Our work suggested that 70 ppbv should be attainable in most places.”

“The updated standards will improve public health protection, particularly for at-risk groups including children and older adults,” Dolwick said. “They also will improve the health of trees, plants, and ecosystems.” 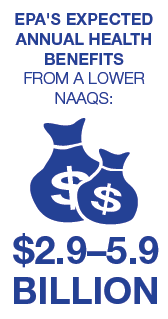 Dolwick stressed the value of the partnership with AQAST, and with Fiore in particular. “Her work has been incorporated in several of our scientific and technical support documents for the proposed ozone standard revisions.”

The current success with Earth-observing satellites is already leading to planned NASA missions to provide a new set of tools for background ozone measuring, such as the upcoming TEMPO mission.

Fiore added, “We are trying to extract as much information as possible from existing instruments, while figuring out ways to best utilize the next generation of satellite instruments.”