NASA Assists During the Kilauea, Hawaii, Eruption of 2018

On May 3rd 2018, the Kilauea volcano(link is external) on Hawaii’s Big Island erupted from new fissures and sent lava flowing over streets and neighborhoods. As the disaster response on the ground lead by the U.S. Geological Survey kicked into gear, managers from NASA’s Earth Science Disasters Program heard from response agencies and sent out a call to NASA’s own researchers, data managers, and satellite teams: What can we do to help?

With an array of sophisticated Earth-observing sensors in orbit and partnerships with space agencies around the globe, NASA had a lot of assets to offer.

“One of the first things emergency responders wanted to know was where the lava was coming out, where are all the fissures,” said J. Carver Struve, NASA emergency management co-lead at NASA Headquarters in Washington who coordinates the organization and distribution of data and satellite imagery from seven NASA centers. 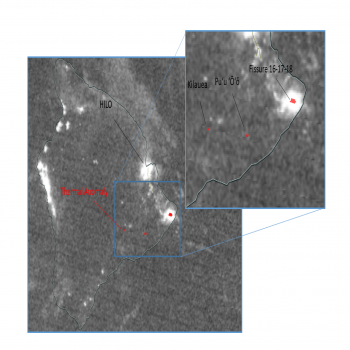 In total, seven instruments onboard five NASA, JAXA, and other partner satellites provided key information on eruption patterns and atmospheric impacts of the Kilauea eruption. These included detection of active fissures(link is external), fires, ash and sulfur dioxide plumes(link is external), deformation of the ground caused by magma movement, and the height and composition of volcanic plumes(link is external). Even astronauts onboard the International Space Station were able to view the eruption, sending digital camera images(link is external) to the USGS and response community. The European Space Agency and Japan Aerospace Exploration Agency also contributed data to the effort.

Feedback from responders in Hawaii using the data has led to the creation of additional data products tailored to their immediate needs. "We're providing actionable scientific products to teams on the ground to support response activities and fill any gaps they may have in their information as the disaster is evolving," said Struve.

In addition to providing data to support recovery and resilience planning, NASA has a long-standing research effort to understand volcanic processes before, during and after eruptions, insights that can also serve as a window into understanding volcanoes on other planets. The current Kilauea eruption is an opportunity to evaluate the performance of instruments to estimate lava flow rates and volume, crucial parameters in volcanic models.

NASA is contributing to the understanding of the eruption using airborne assets. The G-III research aircraft is flying an all-weather, high-resolution instrument called the Glacier and Ice Surface Topography Interferometer (GLISTIN)(link is external) that was developed to study small changes in ice sheets. The science team, based at NASA's Jet Propulsion Laboratory in Pasadena, California, previously used GLISTIN to study the surface topography of Kilauea’s East Rift Zone.

A sequence of repeat flights during the current eruption are using GLISTIN to detect changes in Kilauea's topography associated with the new lava flows, with the goal of measuring the erupted volume as a function of time and ultimately the total volume of the event. Such observations are extremely useful to quantitatively evaluate models for evolution of volcanic processes.