Getting Out From Underwater 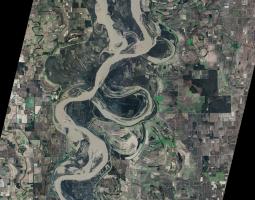 Flooding killed more than 125 people in the U.S. in 2016. When disasters threaten the lives of Americans, NASA Earth Science uses its perspective from space to assist response and recovery efforts. We maintain a close partnership with many federal agencies, including USGS, NOAA, and FEMA.

In 2016, those partnerships strengthened—particularly with FEMA. “This year we focused on deeper collaborations with FEMA,” said Andrew Molthan, NASA Disaster Response Support Team member. “Both in terms of providing products that are well-aligned to support their flood response and by improving ways to share those products for effective and timely decisions.” 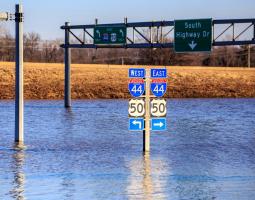 During domestic flooding events, NASA provides data and images from its own satellites, like GPM, Aqua, Terra, and EO-1, and teams with other U.S. agencies and international partners to tap into their spacebased fleets as well. With this constellation of domestic and international satellites, we use Earth observations to map heavy rainfall, predict where flooding will occur, image the extent of ongoing floods, and help identify other impacts such as power outages.

These collaborations helped thousands of Americans recover from a year marked by several devastating and deadly floods.

The first flooding disaster of the year actually straddled the calendar from 2015 into 2016. Waves of heavy rainfall brought record-setting flash flooding and subsequent river flooding to the central and lower Mississippi River Valley. 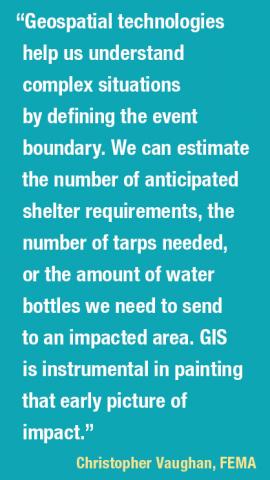 Located at the confluence of the Mississippi and Missouri rivers, the town of West Alton, Missouri, is no stranger to floods. This time, though, the water came too quickly. “We couldn’t do anything to stop this one,” said West Alton Mayor Willie Richter. “Normally we have about two weeks lead time to try and sandbag and prepare for what might happen. This time we only had about three or four days.”

As flooding swamped the Midwest and South, Molthan and fellow NASA Disaster Response Support Team member Dalia Kirschbaum reached out to our Centers and NASA’s academic partners. In a coordinated support to the disaster, the NASA Team provided technical expertise and data to response agencies, guiding and assisting their efforts.

Even when the successive rounds of downpours ended, massive flooding continued to move downriver from Illinois to Louisiana. Our Team took advantage of clear skies to collect targeted imagery for mapping the flood waters. NASA’s EO-1 satellite was among the first satellites to provide optical imagery of the submerged areas for our partners. Aqua and Terra also pitched in, helping our Team produce visual images that mapped flooded areas along the Mississippi River. In particular, Terra’s ASTER instrument detected the extent of the inundation around St. Louis, and soon FEMA had these images.

On the ground in nearby West Alton, Mayor Richter showed FEMA his view. Missouri had major transportation impacts from the flooding, as portions of interstates and railroads were forced to close. “As soon as we could access a majority of the town, we had an initial FEMA damage assessment,” he said. “I went door to door with them so they could see the damage first hand. FEMA also setup a command center in town so the people could apply for help.”

Christopher Vaughan, a geospatial information officer with FEMA, stressed the importance of the immediate partnership between our agencies during floods. “NASA is helping us derive the extent of the disaster earlier,” he noted. “For example, with flood extent maps, you can derive what’s inside that flooded area and estimate the levels of impact. That’s one of the hardest challenges for the emergency management community early on—determining how big and bad it’s going to be.” 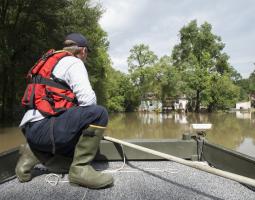 As the flooding gradually pushed down the Mississippi River, our interagency collaboration continued through much of January. And it wasn’t long before our efforts were needed again.

“We were moving as fast as possible to save what we could,” Ginger Harris Heuvel said. She and her family were scrambling to safety in their attic as the waters came rushing in. “We could see the water rising as if a firehose was pumping water into the house.” Unbeknownst to her, Earth observations were already working to help.

The exceptional rainfall began on Friday, August 12, and it was historic—NOAA later estimated it was a one-in-500 year event for central Louisiana. As the flooding started and worsened, FEMA reached out to NASA to request assistance in assessing the imminent disaster. Our Team tapped into the Global Flood Monitoring System (GFMS), a University of Maryland activity sponsored by our Disasters program, to provide FEMA with the potential for flooding and predicted flood inundation for the next several days.

The GFMS forecast model uses rainfall data from the GPM satellite. As rounds of rain continued, GPM monitored the seemingly never-ending onslaught. When the downpours finally stopped days later, estimates topped out at more than 30 inches of rain in parts of Louisiana. Rain gauges on the ground in Heuvel’s hometown of Watson confirmed the staggering accumulation of 31.4 inches—the highest rainfall total measured during the disaster.

Clouds obscured some of what our satellites could see during the peak of the flooding. Luckily, radar could see it—it doesn’t need clear skies or daylight to produce images. Our partner USGS activated the International Charter on Space and Major Disasters, enabling delivery of additional satellite images and space-based synthetic aperture radar, or SAR.

Using these, JPL experts on the Team compared before and after images of flooded areas. Before long, FEMA had flood extent and flood proxy maps thanks to validation from NOAA’s aerial imagery and USGS’ high water marks.

“We estimated that Louisiana would have about 27,000 damaged homes,” said Glen Russell, a remote sensing coordinator with FEMA. “But it was through the acquisition of SAR data and other remotely sensed data that we were able to see that that was a much larger impact than we had forecast.”

Heuvel’s home was one of those casualties. “We were rescued by our local Livingston Parish Sheriff Office Deputies…as we waded out our front door in five feet of water,” she said. “Ninety percent of Livingston Parish went under.” The combined scope of Earth observations helped FEMA managers decide to increase the amount of resources sent to Louisiana. Before long, Heuvel and her family had a new place to live.

“We have been blessed with a very nice FEMA trailer and are so thankful to be able to use it,” Heuvel added. “There are FEMA trailers and campers in most every yard. Everyone is in the state of repair at this time…We all have a long road ahead of us.”

When Tara Bullard saw Hurricane Matthew’s rain bands continuing to drop downpours over her hometown of Lumberton, North Carolina, she worried for what was coming next. “There was nowhere for all of the water to go.”

As she feared, Bullard, the principal of West Lumberton Elementary, soon saw her community become a victim of Matthew. Months later, there were still painful scars. “My school sustained heavy damages as a result of the flooding…We are still displaced, with no immediate plans of returning. I still have students and families living in hotels.”

Well before Hurricane Matthew’s impacts were being felt in Lumberton, our Disaster Response Support Team was monitoring the storm and collaborating with other federal agencies and international partners. This coordinated effort kept watch from the beginning—tracking Matthew as it battered Hispaniola and Cuba and then made its way toward the U.S.

As Matthew’s effects were being felt along the Southeast coast, Suomi NPP’s VIIRS instrument provided crucial insights for detecting which communities had lost power. For Matthew’s potential flooding impacts, the Team once again turned to GFMS and mapped locations from northeastern Florida to North Carolina that were likely to be inundated.

NASA Earth Science’s real-time Land Information System (LIS) also assisted our NOAA and USGS partners in their hurricane planning and response. The LIS incorporated vegetation information from VIIRS and soil moisture observations from SMAP to identify areas of saturated soils that were prone to flash flooding—helping partners identify where flooding would be likely as the rainfall continued to accumulate. 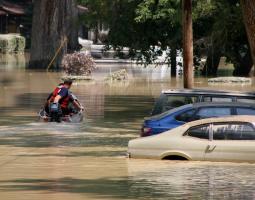 When Matthew’s rains ended, the flooding was just beginning for many communities in the Carolinas. Team members from NASA Marshall used multiple Earth observations to generate flood extent maps for eastern North Carolina, along with storm surge-affected regions along the eastern coast of Florida. NASA Goddard’s Near Real-Time Global MODIS Flood Mapping also used Terra and Aqua imagery to identify the extent of the massive flooding. Our Team aggregated and compared its water detections against the pre- Matthew water extent, as FEMA and other response partners retrieved them through an online portal.

“By utilizing hazard layers that NASA produces, we can develop a more detailed and informed analysis of the housing and infrastructure damage in communities,” noted Brandon Bolinski, a regional hurricane program manager for FEMA. He added, “FEMA leadership can then make informed decisions on placing response assets in the field.”

Even as waters were receding days later, responders were still assessing the full scope of the disaster—Matthew caused more than two dozen deaths in North Carolina alone. For Bullard, NASA’s assistance in this effort left her optimistic that this team approach would help victims in future disasters. Ever the educator, she remarked, “I hope that our situation has the potential to teach and positively impact the way others may respond to a similar situation.”